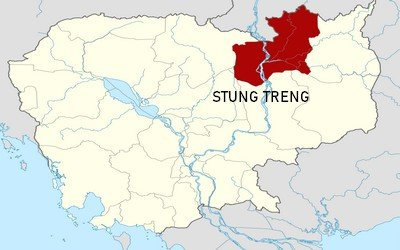 Pick up from lobby at 6:30am in PHNOM PENH

Pick up from lobby at 8::00am in KRONG STUNG TRENG

CHECK ATTRACTIONS AND PRICE ON THE NEXT PAGES ABOVE

STUNG TRENG (Khmer: ស្ទឹងត្រែង, Stœ̆ng Trêng [stɨŋ traeŋ]; Lao: ຊຽງແຕງ, Xiang Taeng; lit. “River of Reeds”) is a province of Cambodia in the northeast. It borders the provinces of Ratanakiri to the east, Mondulkiri and Kratié to the south and Kampong Thom and Preah Vihear to the west. Its northern boundary is Cambodia’s international border with Laos. The Mekong River bisects the province. The province is mostly covered by forest, but logging and fishing put high pressure on the forest and fishery reserves.

The part of the Mekong River where Preah Vihear and Steung Treng Provinces meet transform into a system of raging rapids—on the Cambodian side of the river, the Sopheakmit Waterfalls reveals the power of the Mekong, embodied in a frothing rush of water over 26 meters of limestone rocks.

The observation deck over the Sopheakmit Waterfall in Preah Vihear is easily accessible by tourists, being only 60km from Stung Treng. Come to enjoy the view, and take a meal overlooking the mighty Mekong.

Stung Treng itself has plenty to offer the adventurous tourist. Visitors to this border town can now explore a series of community-tourism-focused villages nearby, and take on the landscape with adventures like kayaking and cycling.

Historical relics can also be found nearby, such as the remnants of a French-built train line that circumvented the Mekong; and a pre-Angkorian temple called Thala Barivat.

The Mekong River between Stung Treng and the Laos border is very light on population and heavy on beautiful scenery. Boulder outcroppings, numerous sets of rapids, swirling pothole currents, wide sweeping stretches of river and forested landscape along the banks all await the boat traveler. It makes for a great trip, either for the traveler that wants to continue on to Laos or for those wanting to enjoy a wild stretch of the Mekong in

Cambodia. The trip is difficult to downright impossible to make on this shallow stretch of the Mekong during the dry season, with cont less sunken islands and a virtual forest of trees growing right in the middle of the river. The trip becomes an obstacle course for the boat drivers this time of the year, as they carefully try to choose the best way to guide their craft through the maze that nature has created without losing a propeller to the river. The best time of the year to take this trip is from May to November when sufficient upstream rains have raised the river to a level that allows the boats to pass through carefully. There is not a whole lot to do once you get to the border area, but travelers can leave their passport with Cambodian immigration (at the small checkpoint on the west bank of the river) and cross to the Laos side to eat at a riverside restaurant and look at the tiny market in the Laos village of Geedahn. Cambodian immigration officers may ask you see them, but it is not a fee set by the central government so you don?t have to pay it. There is also a guesthouse to stay at near this village (on the Laos side of the river, but a couple of hundred meters south along the riverbank where it is still Cambodia).

Which was built here for border traders that lose the day light hours and need a place to spend the night. It?s a nice enough place, but overpriced, with a room that includes two big beds and a fan going for US$ 8 a night. Electricity is running between dusk and midnight. To take the trip, head down to the riverbank area (near the small bullet boats just east of the pier) in Stung Treng town before 8:30 am and talk to one of the operators of the small freight boats. The fare is 15,000 riel (one way) and the trip to the border area takes about 5 ? hours, but is cut down to just over three hours on the trip back south as the swift current on this stretch of the Mekong pushes the boats right along. < If you want a faster journey, approach one of the small fiberglass boat operators, the ones that have the 40-hp outboard motors-they want US$ 20-$25 (one-way) to make the trip- but if you are looking for a quick trip or fast fun, the trip time going upriver is cut down to only 1 ? hours. The slow boats are fast enough coming back downstream so you could save money by grabbing one of those on the return trip. For those wanting to cross into Laos using this route you will need a Laos?s visa in your possession and you also need to stop at the main police station in Stung Treng town (see map) to get a letter of permission to cross the border at this point. This is shown to Cambodian immigration will not let you stamp out of the country without this letter.