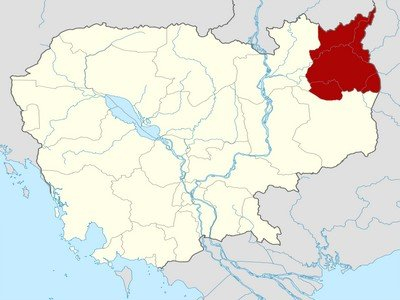 Pick up from lobby at 6:30am in PHNOM PENH

Pick up from lobby at 8::00am in BANLUNG

Noted: if you want to do trekking here, you have to add one more day.

DAY-3: RATANAKIRI – BACK TO PHNOM PENH

Pick up from lobby at 8:30am in RATANAKIRI

Ratanakiri (Khmer: រតនគិរី, pronounced [rŏətanakiriː]; lit. “Gem Mountains”) is a province of northeast Cambodia. It borders the provinces of Mondulkiri to the south and Stung Treng to the west and the countries of Laos and Vietnam to the north and east, respectively. The province extends from the mountains of the Annamite Range in the north, across a hilly plateau between the Tonlé San and Tonlé Srepok rivers, to tropical deciduous forests in the south. In recent years, logging and mining have scarred Ratanakiri’s environment, long known for its beauty.

For over a millennium, Ratanakiri has been occupied by the highland Khmer Loeu people, who are a minority elsewhere in Cambodia. During the region’s early history, its Khmer Loeu inhabitants were exploited as slaves by neighboring empires. The slave trade economy ended during the French colonial era, but a harsh Khmerization campaign after Cambodia’s independence again threatened Khmer Loeu ways of life. The Khmer Rouge built its headquarters in the province in the 1960s, and bombing during the Vietnam War devastated the region. Today, rapid development in the province is altering traditional ways of life.

Yeak Laom Lake (បឹងយក្សឡោម) is a crater lake and a tourist destination in Yeak Laom commune, Ban Lung District ក្រុងបានលុង, Ratanakiri Province ខេត្តរតនគីរី, north-eastern Cambodia. It is pronounced in English as “Yak Lom.” It is about 5 kilometers south of Banlung provincial town, and is located in a protected area. In 2012, Yeak Laom Lake was selected in the list of the 15 most beautiful crater lakes in the world. Around 700,000 years ago, a volcanic eruption resulted in the creation of the lake in Ratanakiri’s mountain region. The shore of Yeak Laom Lake forms an almost perfect circle. It is 800 meters in diameter, and about 48 meters deep. Its shape and depth are due to its volcanic’s origin Banlung’s rainy season occurs from May–October while it has dry periods from December–February. On average, the warmest month is April, and the coolest month is January. July is the wettest month while January is the driest.

The main market, Phsar Banlung, is a relatively unextraordinary traditional market offering the usual range of items for local consumption. There is one souvenir shop in front of the market, and food stalls set up in front of the market in the evening. For most travelers’ needs (soft drinks, water, beer, liquor,

toiletries, snacks, souvenirs, etc.), the small drink shops next to the monument in the center of town carry most everything. Many Khmer Loeu people come to the Phsar Banlung wearing traditional “back strap” baskets laden with vegetable, fruits and forest products which they sell at the market. It can be an interesting and photogenic scene. Most have packed up and left by 10:00AM.

Keo district, Ratanakiri province – about 30 kilometres down the road east of Ratanakiri province’s Banlung town, about 10 gemstone miners from various provinces were digging a hole deep inside a rubber plantation several kilometres from a concrete road in the centre of Bor Keo district. Before reaching the mining site, two gemstone brokers were waiting at the entrance to the site along the concrete road. Their job is to bring any visitors to the site and persuade them to buy their own gemstones. The brokers know clearly where miners are digging for gemstones. The miners often change locations after an area of land has been mined. “If you want to know where the next mining site is, you can contact us because these miners always change to different areas. The location is usually far removed from the road,” said Ms. Sophy, one of the two brokers.

She said there are normally visitors, both Cambodians and foreigners, who visit the mining site and buy raw gemstones from the miners or brokers like her as the price is probably lower compared with those found on the market.