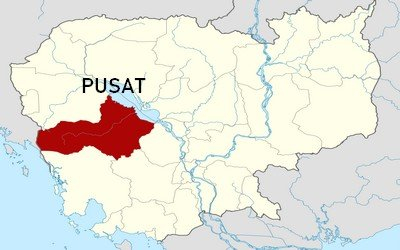 Pick up from lobby at 8:00am in VEAL VEANG

Pursat (Khmer: ពោធិ៍សាត់, Poŭthĭsăt, pronounced [poːsat]; lit. “Floating Banyan”) is a province (khaet) of Cambodia. It is in the western part of the country and borders clockwise from the north: Battambang province, the Tonlé Sap, Kampong Chhnang province, Kampong Speu province, Koh Kong province, and Thailand. It lies between the Tonle Sap and the northern end of the Cardamom Mountains. The Pursat River bisects the province, running from the Cardamoms in the west to the Tonle Sap in the east. The fourth largest province of Cambodia in area, Pursat ranks only 14th in population. The region is accessible by National Highway 5, by boat, rail and by numerous smaller roads. The capital, Pursat town, lies 174 kilometres north west of Phnom Penh by road and 106 kilometres south east of Battambang. Pursat is home to Wat Bakan, considered to be among the oldest active pagodas in Cambodia and revered as one of the most holy sites of Cambodian Buddhism. The province also hosts the annual River Run Race, an event that includes 5 km and 10 km races that generally follow the path of the Pursat River for men and women, including those requiring wheelchairs. Since its inaugural race in 2007, the event has grown to the second largest of its kind in Cambodia

Neak Ta Khleang Moeang is the main historical site in Cambodia and located at Snam Preah Commune, Ba Kan District, about 6 kilometers south of Pursat provincial town. The site is the sacred place prayed and worshipped by tourists who come from the near and far areas. This venerable site has a statue of Neak Ta

Koh Sampov Meas or it’s often called Sampov Meas Island or Koh Sampov Meas Garden is located in In front of Pursat hospital, far ~1km away from the first concrete bridge (In the middle of Pursat River), Pursat City, Pursat province. Koh Sampov Meas is in the category of the sight or landmark. Things to do, as well as the attractions of Koh Sampov Meas for tourists such as food and more. For the trip to the location of Koh Sampov Meas, it is easy because it is not necessary to walk and cross the river or take a boat. For parking, tourists can park directly at the location. For a relaxing seating area, Koh Sampov Meas is not yet set up a seating area for tourists. Besides Koh Sampov Meas has food ordering or food stations and canteens, but for the restaurant is not exist. For accommodation, Koh Sampov Meas is not available yet such as bungalow, guesthouse, and hotel. The island’s appearance seems strange to other islands because it looks like floating boats on the middle of the river, which should attract the interest of tourists to visit there. And there is also a natural garden. But the special thing is that when the waters up, the island seems to float up in the water. The name “Koh Sampov Meas” has a legend of history. Residents living there said, “At first, a large ship passed through and was caught up in the river, and then it became a small island that is now called Sampov Meas Island.”

Floating Village of Lake Tonle Sap is heading east from Pursat town, about one-third of the way to Kampong Chhnang town is

the town of Krakor. Just a few kilometers to the north are Lake Tonle Sap and the floating village of Kampong Loo-uhng. It?s a complete village on the water populated mostly by Vietnamese fishermen. You can arrange for a small non-motorized boat to show you

Veal Veang shares a border with Battambang Province to the north, Thailand to the west, Koh Kong Province to the south and the Pursat districts of Phnum Kravanh and Bakan to the east. The northern end of the Cardamom Mountains cover the eastern edge of Veal Veang to the Thai border. According to the 1998 Census, Veal Veang district is made up of 5 communes and 20 villages. However, the population of the district was not enumerated in the census due to security concerns, From 1979 until the end of the 1990s, Veal Veang was one of the last remaining strongholds of the Khmer Rouge. The legacy of the Cambodian civil war and over 30 years of Khmer Rouge occupation has left many parts of the district heavily contaminated with landmines. As mines are cleared and roads improved, logging both legal and illegal threatens the remaining forested areas. Veal Veang is also home to around 300 families of the few remaining ethnic minority Pear people

Phnom 1500 is located in Veal Veng District, Pursat province and far about ~150km away from Sampov Meas Island. Phnom 1500

is in the category of the Mountain, Natural tourism site. Things to do, as well as the attractions of Phnom 1500 for tourists such as Seeing mountain view, Viewing sunset, Viewing sunrise, Having picnic, Trekking and more. For the trip to the location of Phnom 1500, it is easy because it is not necessary to walk and cross the river or take a boat. For parking, tourists can park directly at the location. For a relaxing seating area, Phnom 1500 is not yet set up a seating area for tourists. Besides Phnom 1500 has canteens but for the food ordering or food station and restaurant are not exist.
For accommodation, Phnom 1500 is not available yet such as bungalow, guesthouse, and hotel.

Sampov Meas Island. Tmor Da Toch Waterfall is in the category of the Waterfall, Natural tourism site. Things to do, as well as the attractions of Tmor Da Toch Waterfall for tourists such as Having picnic, Swimming, Seeing mountain view and more. For the trip to the location of Tmor Da Toch Waterfall, it is easy because it is not necessary to walk and cross the river or take a boat. For parking, tourists can park directly at the location. For a relaxing seating area, Tmor Da Toch Waterfall has a seating area for tourists, and there is also order food directly from there. Besides Tmor Da Toch Waterfall has food ordering or food stations but for the canteen and restaurant are not exist. For accommodation, Tmor Da Toch Waterfall is not available yet such as bungalow, guesthouse, and hotel. If we were to travel there, we certainly have traveled along the slopes of the mountains which makes the tourists get a lot of new experience. Please note that there are no road signs to make it easy for tourists to travel to visit there yet. Therefore, tourists who wish to visit there need to ask villagers on the road to avoid losing the way. Visitors will see the water flowing on the slopes of the rocks, seemingly as stairs, which provide easy access to tourists to swim or bathe with a panoramic view of the forest. In addition, have a look at the forest with a sound of wildlife crying. The waterfall has 2 levels, the upper floor is a water bath, because it has water flowing on the slopes of a rocky stone, seemingly as stairs. For the lower floor of the waterfall is about 10 meters high for those who want to swim.