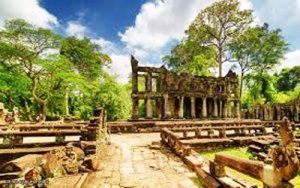 Preah Khan (Khmer: ប្រាសាទព្រះខ័ន; “Royal Sword”) is a temple at Angkor,Cambodia, built in the 12th century for King Jayavarman VII to honor his father. It is located northeast of Angkor Thom and just west of the Jayatataka baray, with which it was associated. It was the centre of a substantial organisation, with almost 100,000 officials and servants. The temple is flat in design, with a basic plan of successive rectangular galleriesaround a Buddhist sanctuary complicated by Hindu satellite temples and numerous later additions. Like the nearby Ta Prohm, Preah Khan has been left largely unrestored, with numerous trees and other vegetation growing among the ruins.

Preah Khan was built on the site of Jayavarman VII’s victory over the invading Chams in 1191. Unusually the modern name, meaning “holy sword”, is derived from the meaning of the original—Nagara Jayasri (holy city of victory). The site may previously have been occupied by the royal palaces of Yasovarman II and Tribhuvanadityavarman. The temple’s foundation stela has provided considerable information about the history and administraktion of the site: the main image, of the bodhisattva Avalokiteśvara in the form of the king’s father, was dedicated in 1191 (the king’s mother had earlier been commemorated in the same way at Ta Prohm). 430 other deities also had shrines on the site, each of which received an allotment of food, clothing, perfume and even mosquito nets; the temple’s wealth included gold, silver, gems, 112,300 pearls and a cow with gilded horns. The institution combined the roles of city, temple and Buddhist university: there were 97,840 attendants and servants, including 1000 dancers and 1000 teachers.

The temple is still largely unrestored: the initial clearing was from 1927 to 1932, and partial anastylosis was carried out in 1939. Since then free-standing statues have been removed for safe-keeping, and there has been further consolidation and restoration work. Throughout, the conservators have attempted to balance restoration and maintenance of the wild condition in which the temple was discovered: one of them, Maurice Glaize, wrote that. The temple was previously overrun with a particularly voracious vegetation and quite ruined, presenting only chaos. Clearing works were undertaken with a constant respect for the large trees which give the composition a pleasing presentation without constituting any immediate danger. At the same time, some partial anastylosis has revived various buildings found in a sufficient state of preservation and presenting some special interest in their architecture or decoration.

Since 1991, the site has been maintained by the World Monuments Fund. It has continued the cautious approach to restoration, believing that to go further would involve too much guesswork, and prefers to respect the ruined nature of the temple. One of its former employees has said, “We’re basically running a glorified maintenance program. We’re not prepared to falsify history”. It has therefore limited itself primarily to stabilisation work on the fourth eastern gopura, the House of Fire and the Hall of Dancers.

The fourth enclosure wall bears 5 m garudas holding nagas. Buddha images in the niches above were destroyed in the anti-Buddhist reaction of Jayavarman VIII.

The outer wall of Preah Khan is of laterite, and bears 72 garudas holding nagas, at 50 m intervals. Surrounded by a moat, it measures 800 by 700 m and encloses an area of 56 hectares (140 acres). To the east of Preah Khan is a landing stage on the edge of the Jayatataka baray, which measures 3.5 by 0.9 km (2 by 1 mi). This also allowed access to the temple of Neak Pean in the centre of the baray. Once dried up, the Jayatataka baray is now filled with water again, as at the end of each rainy season, all excess water in the area is diverted into it.

The purpose of this two-storied building with round columns is unknown.

West of the third eastern gopura, on the main axis is a Hall of Dancers. The walls are decorated with apsaras; Buddha images in niches above them were destroyed in the anti-Buddhist reaction under Jayavarman VIII. North of the Hall of

Dancers is a two-storeyed structure with round columns. No other examples of this form survive at Angkor, although there are traces of similar buildings at Ta Prohm and Banteay Kdei. Freeman and Jacques speculate that this may have been a granary. Occupying the rest of the third enclosure are ponds (now dry) in each corner, and satellite temples to the north, south and west. While the main temple was Buddhist, these three are dedicated to Shiva, previous kings and queens, and Vishnu respectively. They are notable chiefly for their pediments: on the northern temple, Vishnu reclining to the west and the Hindu trinity of Vishnu, Shiva and Brahma to the east; on the western temple,Krishna raising Mount Govardhana to the west.

Connecting the Hall of Dancers and the wall of the second enclosure is a courtyard containing two libraries. The second eastern gopura projects into this courtyard; it is one of the few Angkorian gopuras with significant internal decoration, with garudas on the corners of the cornices. Buddha images on the columns were changed into hermits under Jayavarman VIII.

Between the second enclosure wall (85 by 76 m or 279 by 249 ft) and the first enclosure wall (62 by 55 m or 203 by 180 ft) on the eastern side is a row of later additions which impede access and hide some of the original decoration. The first enclosure is, as Glaize said, similarly, “choked with more or less ruined buildings”. The enclosure is divided into four parts by a cruciform gallery, each part almost filled by these later irregular additions. The walls of this gallery, and the interior of the central sanctuary, are covered with holes for the fixing of bronze plates which would originally have covered them and the outside of the sanctuary—1500 tonnes was used to decorate the whole temple. At the centre of the temple, in place of the original statue of Lokesvara, is a stupa built several centuries after the temple’s initial construction.

Microbial biofilms have been found degrading sandstone at Angkor Wat, Preah Khan, and the Bayon and West Prasat in Angkor. The dehydration and radiation resistant filamentous cyanobacteria can produce organic acids that degrade the stone. A dark filamentous fungus was found in internal and external Preah Khan samples, while the alga Trentepohlia was found only in samples taken from external, pink-stained stone at Preah Kha.