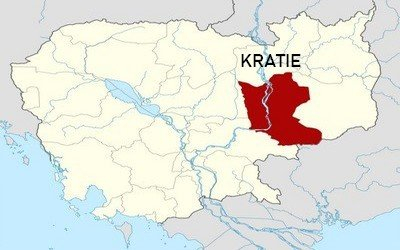 Pick up from lobby at 8:30am in KRATIE

CHECK ATTRACTIONS AND PRICE ON THE NEXT PAGES

Kratié, alternatively Kraches or Kracheh (Khmer: ក្រចេះ, Krâchéh [krɑˈceh]) is a province (khaet) of Cambodia located in the northeast. It borders Stung Treng to the north, Mondulkiri to the east, Kampong Thom and Kampong Cham to the west, and Tbong Khmum and Vietnam to the south. The area now known as Kratié was part of the early first millennium Kingdom of Funan until Funan itself was superseded and absorbed in the 6th century by Chenla. Sampheak Borak, the former Royal Capital during the Chenla Era, is located in Sambo District.[citation needed] In addition, Kratié has Vihear Sasar Muayroy Pagoda built in the 16th century. This pagoda is related to a Khmer legend Krapeur Nen Thun (Venerable Monk Thun, the Crocodile). Kratié has several temples built in the 8th century such as Khvas Pi, Pram, and Koh Kring that has perfect deities, ancient halls, Khmer ancient houses, and French-style buildings. The area near Kratié along the Mekong River was one of the most densely populated regions of the pre-Angkorian era of Cambodia.

The Mekong River flows from the north to the south of the province; approximately 140 km of the river is located in Kratié. The river is home to Irrawaddy dolphins, fish, and bird. The flow of the Mekong River at Kratié town varies greatly. There are hundreds of seasonally flooded islands in the river. As of 2007, the Cambodian government planned to build a dam on the Mekong River near Kratié town. The province also contains many forests, the Phnom Pram Poan mountain range, Phnom Prech, and rubber plantations. Eastern Kratié is an important bird area. The province is mostly covered in dense forest. Craters from Operation Menu bombings during the Vietnam War, some of which are filled with water, are still visible in the countryside. Some land in Kratié is used for agriculture, though a smaller percentage than elsewhere in Cambodia. The province has a monsoonal climate, with a cool season from November to March, a hot season from March to May, and a rainy season from May to October. Flooding is frequent in Kratié; the Mekong may overflow by as much as 4 m during the rainy season.

Irrawaddy Dolphins about fifteen to twenty of these rare freshwater dolphins make their home on a beautiful stretch of the Mekong River near a small set of rapids. They make upward arches, breaking the surface of the water as they swim about the area. They are not jumpers like their sea-faring relatives and are quite a bit shyer as well. They have good reason to be shy towards humans as they have been hunted and killed by fishermen in the past. The hope is that their numbers will slowly increase, as more fishermen in the area are educated about them. They are most active in the early morning hours (around 6 am) and the late afternoon and early evening hours. However, we went during the mid-afternoon heat of the day and had numerous sightings. A local family hires out their small towboat and a son to take you out on the river for a closer look. The charge is 3,500 riel per person. To get there, just follow the road north from the Globe traffic circle for 14 km Turn left at the dolphin picture sign. The family and river are there.The Mekong River Irrawaddy dolphin (Orcaella brevirostris) population inhabits a 190km stretch of the Mekong River between Cambodia and Lao PDR. The latest population is estimated between 64 and 76 members (2008 figures). The Irrawaddy dolphin is identified by a bulging forehead, a short beak, and 12-19 teeth on each side of each jaw. The pectoral fin is broadly triangular. There is a small dorsal fin, on the posterior end of the back.

Kampi Resort is the great natural resort providing shelter to Dolphins. When we travel along the National Road No.7 to the North about 15 Kilometers from the provincial town, we will arrive at a bridge of Prek Kampi where we have seen a very novel view of the Mekong River consisting of thousands of islands full of green water plants. Usually from January to May, there are local and international visitors, who call on the Kampi resort for swimming, especially during the Khmer New Year.
Kampi resort has special features such as:
– The resort is closed to the National Road, assured safety and has large parking sites for motocycles and cars.
– The riverbank is full of sand, and there are many islands assuring the visit of thousands of visitors.
– The water is clear as mirror, has 0.5-1.30 meter depth and flows with undangerous speed. Kam Py resort has not only the good natural manner, but also been provided the good servises for visitors such as the crossing bridge, floating cottages, soft-drink shops, restaurants, emergency agency, guards and security as well. Nowadays, the provincial tourist office has endeavored to upgrade arranging the resort to be better and more attractive.

KOH TRONG, AN ISLAND IN THE MEKONG

Lying just across the water from Kratie is the island of Koh Trong (កោះទ្រុង), an almighty 6km-long sandbar in the middle of the river. Cross here by boat and enjoy a slice of rural island life. Attractions include an old stupa and a small floating village, as well as the chance to encounter one of the rare Mekong mud turtles who inhabit the western shore.

There are two homestays on the island. Best is Koh Trong Community Homestay I, set in an old wooden house, offering two proper bedrooms and fancy-pants bathrooms (that is, thrones not squats). It is located about 2km north of the ferry dock near Rajabori Villas. Ride your bike, take a moto (motorcycle taxi; US$1) or ride an ox-cart.

Rajabori Villas is a boutique lodge with a swimming pool and attractive bungalows that provide the best accommodation in the Kratie region. It’s located at the northern tip of the island. Practically next door is the more rustic Arun Mekong, with a nice mix of tastefully furnished rooms and bungalows, but electricity runs only from 6pm to 11pm here. Catch the little ferry from the boat dock (with/without bicycle 2000r/1000r, 10 minutes, last trip 6pm) in Kratie. From the ferry landing on Koh Trong, a moto costs US$1.50 to the north tip where most of the accommodation is. A private boat to the resorts costs about US$6. Bicycle rental is available on the island near the ferry landing for US$1, or do the loop around the island on a moto (US$2.50).