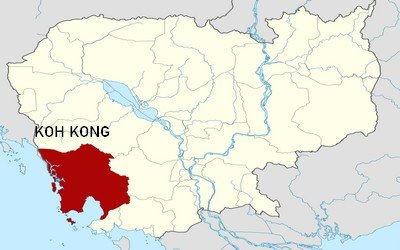 Pick up from lobby at 4:30am in SIEM REAP

Pick up from lobby at 8:15am in KOH KONG

Pick up from lobby at 6:30am in KOH KONG

Koh Kong (Khmer: ខេត្តកោះកុង, Kaôh Kŏng [kɑh koŋ], is a province (khaet) of Cambodia. Its capital is Khemarak Phoumin (Koh Kong). The province has been the site of a Sino-Cambodian port development project in Dara Sakor. The project is planned to spread over 45,000 hectares, to include casinos, golf courses, and resorts. A 20 kilometre stretch of coastline will be turned into a deep-water port to accommodate cruise ships as well as freight. Near the port, an airfield with a runway 3,400 metres is longer than needed for commercial flights, while its turning bays are too small for civilian aircraft. Therefore, analysts suspect that the port project is a Cambodian-Chinese civil-military collaboration that will permit the Chinese navy to use the facilities as a forward operating base. Responding to US concerns, Prime Minister Hun Sen has denied the charge, pointing out that the Cambodian constitution “…has no provision for accommodating foreign military bases on its soil. From 1795 to 1904 the area was under Siamese administration with the local name of “Koh Kong”. During the reign of King Mongkut the name Patchan Khiri Khet was given to the city as the area falls at the same latitude as another city of Prachuap Khiri Khan which also had its name changed during the same year. In 1904, the region and the city of Trat was ceded to French Indochina in exchange of French troop evacuation from Chanthaburi. In 1907 Trat was returned to Siam in exchange for the Siamese province of Inner Cambodia while Koh Kong remained part of French Cambodia.

The Koh Kong Bridge is a bridge in Koh Kong Province, Cambodia. The bridge crosses the Kaoh Pao river, linking the

province capital of Khemarak Phoumin (also known as Koh Kong City) to Pyam, near the Thai border. It is the longest bridge in Cambodia at 1900 metres, and it was inaugurated in April 2002. Koh Kong Bridge was built by LYP Group, a large Cambodian business and construction company started and owned by local tycoon and state senator Ly Yong Phat. LYP Group was supposed to operate the bridge for 30 years, as part of the construction deal, but the Cambodian State bought the bridge in October 2017 and crossing has been free since then. Koh Kong Bridge is an important part of National Road 48 (NR 48), linking Koh Kong Province to the capital of Phnom Penh. In a larger scheme, the bridge also finalised a long land transport route, connecting Thailand with Vietnam.

Khun Chang Khun Phaen (Thai: ขุนช้างขุนแผน, pronounced [kʰǔn tɕʰáːŋ kʰǔn pʰɛ̌ːn]) is a long Thai epic poem which originated from a legend of Thai folklore and is one of the most notable works

in Thai literature. The work’s entire length is over 20,000 couplets. Khun Chang and Khun Phaen are the leading male characters, where “Khun” was a junior feudal title given for male commoners. The story recounts the adventurous and amorous struggles of the three main protagonists. Much of their relationship can be described as a love triangle. Khun Phaen (dashing but poor) and Khun Chang (rich but ugly) compete for the lovely Wanthong from childhood for over fifty years. Their stories transpire amid the larger backdrop of national events, including two wars, several abductions, a suspected revolt, an idyllic sojourn in the forest, two court cases, trial by ordeal, jail, and treachery. Ultimately the King of Ayutthaya condemns Wanthong to death for failing to choose between the two men. The KCKP epic existed for a long time as an orally transmitted poem among Thai troubadours. The poem was first written down and published in printed form in 1872, and a standard edition first published in 1917–1918. Like many works with origins in popular entertainment, it is fast-moving and replete with heroism, romance, sex, violence, folk comedy, magic, horror, and passages of lyrical beauty. In Thailand, the story is universally known. Children learn passages at school, and the poem is a source of songs, popular aphorisms, and everyday metaphors. A standard edition of KCKP, as published by the National Library, is 1085-pages long. A complete English prose translation of KCKP was published by Chris Baker and P. Phongpaichit in 2010.

of Koh Kong provincial town along National Road 48. There are 84 families living in this area. They earn their living by fishing and hunting. The waterfall has two stages. The first stage is 5 to 6 meters high; the second stage is 12 to 15 meters high. Ta Tai waterfall was developed as a model site in Koh Kong to attract local and foreign tourists.Ta Tai waterfall is also known as Ta Eysei waterfall. According to legend, a man named Ta Tai and his son went to the waterfall to fish because the waterfall was the joining point between fresh water and salt water. There was a storm and the resulting floods carried away Ta Tai’s son. Four or five days later, however, the boy was found at the same spot from where he disappeared. When Ta Tai questioned his son, the boy said: “There is someone who took me to a secret place, where he turned into a vampire and wanted to kill me. But suddenly Ta Eysei (a hermit) appeared to save me and took me back.” After hearing the story, Ta Tai and his wife believed that their son was saved by Ta Eysei or Neak Sachang (another mane of hermit). Ever since then, the Waterfall has been called Ta Eysei Waterfall or Ta Tai Waterfall.

Located in Kaoh Kong, Tatai Paradise Eco Resort is in the mountains and on the waterfront. Shoppers can check out Dong Tong Market, while everyone can enjoy the natural beauty of

Peam Krasaop Wildlife Sanctuary and Tatai Waterfall. All offerings provided by Tatai Paradise Eco Resort help to ensure a pleasant stay for all travelers. Exploring Tatai is made even more convenient with the taxi, car hire and shuttle services available at the tent. For guests arriving by car, parking is provided free of charge. Always get the assistance you need with front desk services including concierge service and express check-in or check-out. Booking the best tickets and getting the hottest restaurant reservations are made easy with help from the tent’s tours. For longer stays or whenever you need it, the dry cleaning service and laundry service keep your favorite travel outfits clean and available. Feel like doing nothing? Available services like room service and daily housekeeping let you get the most out of

was established in 1993. The area is known for its mangroves and numerous islands separated by a maze of bays and channels. It boasts a unique mangrove ecosystem consisting of 23,750 hectares and has around 10,000 people living within its borders. The area is influenced by inter-tidal levels and water from highland areas. Peam Krasaop Wildlife Sanctuary provides favorable conditions for fishery and other resources. Many people have resided on and done various occupations for their livelihoods and are dependent upon the natural resources in the area, including intensive shrimp aquaculture, large-scale charcoal production, and other purposes.

The first modern hotel along the Tatai River. The freeform design of Ta Tai Resort and Marina works well with the river and jungle

setting. Airy, well-decorated rooms, apartments and villas, an excellent restaurant, plus a pool and marina, make it a welcome addition to this eco-tourism destination. Right by the Tatai Bridge, on the road to the riverside town of Koh Kong and the Thai border. The bridge is also the jumping-off point for several properties along the river itself. Tatai Waterfall trips and trekking in the Cardamom Mountain are easy to arrange, and the on-site marina is handy for boat trips to Koh Kong Island and sunset cruises. Koh Kong is 13 miles/20km away, where you’ll find a local market, ATMs, supermarkets, pharmacies and restaurants.

Cambodia. Koh Kong Island in the gulf of Thailand is 22 km long and 6 km wide and there only two beaches, beach No 3 and beach No 7 that offer overnight stays. On the west side of the island, beach No. 3, Koh Kong White Sand Beach Resort in Cambodia offers bungalows laid out on a picture postcard beach. You can relax at the beach or make friends with a kayak tour and Jungle trekking. The bungalows and furnishings are in very good condition and the prices are between $ 15 – $ 25 As of April 2014. On beach No 7, the other night stays beach, you will find Koh Kong Island Resort which is set on its own beautiful grounds. Directions from Koh Kong City to Koh Kong Island in Cambodia.

Sner Beach doesn’t see too many tourists come through. So when you show up, the local Khmer vendors and restaurant staff will be delighted to see you! Prepare yourselves for first class service

where you’ll be waited on with a smile. With beachside tables and chairs, you can sink your feet in the sand while you sip on a cool cocktail underneath a shady umbrella in between refreshing swims in the ocean. This is the life. You’ll have your pick from freshly caught fish, squid, and crab that the local fishermen bring back daily. All seafood dishes you order from the local food stands will be incredibly fresh, totally delicious, and ridiculously cheap. Go crazy.