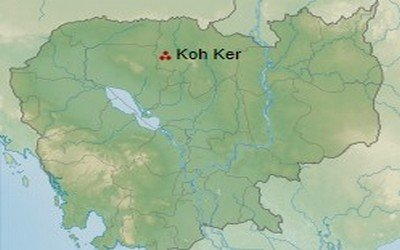 Pick up from lobby at 7:00am in SIEM REAP : (THIS TOUR IS USING ONE DAY ANGKOR TICKET)

Koh Ker is a remote archaeological site in northern Cambodia about 120 kilometres (75 mi) away from Siem Reap and the ancient site of Angkor.

Koh Ker is the modern name for an important city of the Khmer empire. In inscriptions the town is mentioned as Lingapura (city of lingams) or Chok Gargyar (translated as city of or as iron tree forest). Under the reign of the kings Jayavarman IV and Harshavarman II Koh Ker was briefly the capital of the whole empire (928–944 AD). Jayavarman IV enforced an ambitious building program. An enormous water-tank and about forty temples were constructed under his rule. The most significant temple‑complex, a double sanctuary (Prasat Thom/Prang), follows a linear plan and not a concentric one like most of the temples of the Khmer kings. Unparalleled is the 36-metre (118 ft)-high seven‑tiered pyramid, which most probably served as state temple of Jayavarman IV. Really impressive too are the shrines with the two‑meter 6 ft 7 in high lingas.

The most south sanctuary of this group is the Prasat Pram on the west side of the road. A small (300 metres (328 yd)) long path leads to the monument. It has five towers or prasats (pram = five).

Three brick towers stand in a row on the same platform. They face east. The central one is a bit taller than the others. In each of these prasats, once stood a lingam. These and the beautifully carved lintels were looted. Two prasats (faced west) are standing in front of the platform. One is built of brick and has diamond‑shaped holes in the upper part. This fact indicates that this tower once served as a fire sanctuary (fire cults were very important during the era of the Khmer kings). The other building is small, made of laterite and (in comparison with the brick towers) in bad condition. The bricks of small regular size are held together with an organic mortar of unknown composition (plant sap?). Originally the towers were covered by white stucco; remains of it can still be seen. Two of the towers are pictorially covered by roots. The five towers are surrounded by an enclosure. The collapsed entrance door (gopuram) is at the east side. Two artefacts of the Prasat Pram can be seen in the National Museum in Phnom Penh: A damaged lion statue and fragments of a standing four-armed Vishnu.

sandstone and brick An early 10th century temple dedicated to the Hindu deity Shiva. The temple’s fire damaged (black) outer surface probably gave it its name (Neang Khmau means the “Black Lady” in Khmer). The name of the temple is also said mean “Black Virgin” and legend says it might once have been heaven to Kali, the Dark Goddess of Destruction.

The Prasat Balang is the first of three Linga-Shrines standing along the ring-road. It is a square laterite building standing on a platform and has one doorway and an open roof. In the 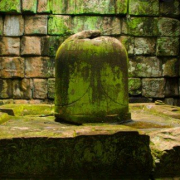 sanctuary is an impressive lingam standing on yoni. The phallus-symbol is about 2 m (7 ft) high, has a diameter of nearly 1 m (39 in) and a weight of several tons. Together with the yoni it was carved out of the bedrock at this place. The lingam is in a good condition. The yoni is about 1 m (39 in) high and looks like an altar. On all four sides once were carved reliefs. In each of the four corners stood a beautiful chiselled Garudu with raised arms giving the impression these mythical figures would bear the yoni. Unfortunately the reliefs and the Garudas were looted. Around the Yoni there is just a small space giving room for some priests to perform the prescribed rituals. The water they put on the lingam became holy by touching the symbol of Shiva, run down and was collected in a ditch of the yoni. Then via a spout (with is still intact) it flowed to the outside of the shrine where believers could touch the blessed water.

Sometimes written Prasat Kra Chap, today the site has well preserved entrance gate and the ruins of 5 towers arranged in a quincunx. From inscriptions around the doors it has been established that the temple was dedicated in 928 to Tribhuvanadeva, a linga representation of Shiva

A small path leads from the ring-road to the Prasat Damrei (damrei = elephant). This sanctuary has an enclosure and stands on a high platform. On each of its four sides is a staircase with 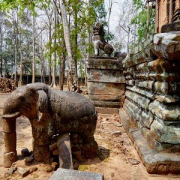 about ten steps. Eight stone lions once flanked the stairs but only one remains in its original place. A beautiful elephant sculpture once stood at each of the four corners of the platform but only two remain. The sanctuary is built of brick and is in good condition. A Sanskrit inscription found at the temple offers evidence that an erstwhile lingam was once erected on the top of the pyramid (Prang). 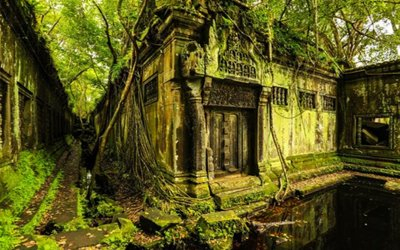 Beng Mealea is a spectacular sight to behold, Beng Mealea, located about 68km northeast of Siem Reap, is one of the most mysterious temples at Angkor, as nature has well and truly run riot. Built to the same floorplan as Angkor Wat, exploring this titanic of temples is Angkor’s ultimate Indiana Jones experience. Built in the 12th century under Suryavarman II, Beng Mealea is enclosed by a massive moat measuring 1.2km by 900m. The temple used to be utterly consumed by jungle, but some of the dense foliage has been cut back and cleaned up in recent years. Entering from the south, visitors wend their way over piles of finely chiselled sandstone blocks, through long, dark chambers and between hanging vines. The central tower has completely collapsed, but hidden away among the rubble and foliage are several impressive carvings, as well as a well-preserved library in the northeastern quadrant. The temple is a special place and it is worth taking the time to explore it thoroughly – Apsara caretakers can show you where rock-hopping and climbing is permitted. The large wooden walkway to and around the centre was originally constructed for the filming of Jean-Jacques Annaud’s Two Brothers (2004), set in 1920s French Indochina and starring two tiger cubs. The filming included 20 tigers of all ages for continuity throughout the story. There are several very basic, unmarked family homestays a few hundred metres behind the restaurants opposite the temple entrance. The best restaurant is Romduol Angkor II , a sister restaurant to the Romduol Angkor near Sra Srang. Wholesome Cambodian food is on offer, plus ice-cold drinks.It costs US$5 to visit Beng Mealea and there are additional small charges for transport, so make sure you work out in advance with the driver or guide who is paying for these. Beng Mealea is about 40km east of Bayon (as the crow flies) and 6.5km southeast of Phnom Kulen. By road it is about 68km (one hour by car, longer by moto or remork-moto ) from Siem Reap. The shortest route is via the junction town of Dam Dek, located on NH6 about 37km from Siem Reap in the direction of Phnom Penh. Turn north immediately after the market and continue on this road for 31km. The entrance to the temple lies just beyond the left-hand turn to Koh Ker. Allow a half day to visit, including the journey time from Siem Reap or combine it with Koh Ker in a long day trip best undertaken by car or 4WD. Beng Mealea is at the centre of an ancient Angkorian road connecting Angkor Thom and Preah Khan in Preah Vihear Province, now evocatively numbered route 66. A small Angkorian bridge just west of Chau Srei Vibol temple is the only remaining trace of the old Angkorian road between Beng Mealea and Angkor Thom; between Beng Mealea and Preah Khan there are at least 10 bridges abandoned in the forest. This is a way for extreme adventurers to get to Preah Khan temple, but do not undertake this journey lightly.