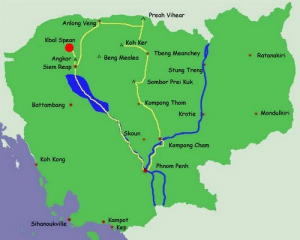 Pick up from the hotel at 7:30am, at lobby in SIEM REAP

On the way back if we have time, we will add them to your trip such as: LANDMINE MUSEUM/SHOOTING RANGE/LOCAL PALM SUGAR MARKET/BBC (Banteay Srei Butterfly Center). 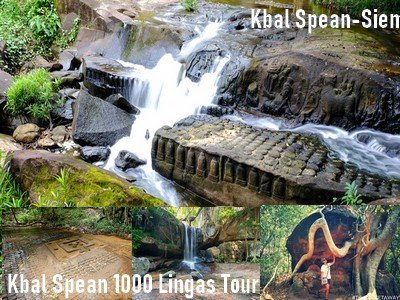 Kbal Spean (Khmer: ក្បាលស្ពាន) (“Bridge Head”) is an Angkorian era archaeological site on the southwest slopes of the Kulen Hills to the northeast of Angkor in Banteay srei, Siem Reap Province, Cambodia. It is situated along a 150m stretch of the Stung Kbal Spean River, 25 kilometres (16 mi) from the main Angkor group of monuments, which lie downstream. The site consists of a series of stone rock relief carvings in sandstone formations of the river bed and banks. It is commonly known as the “Valley of a 1000 Lingas” or “The River of a Thousand Lingas”. The motifs for stone carvings are mainly myriads of lingams (phallic symbol of Hindu god Shiva), depicted as neatly arranged bumps that cover the surface of a sandstone bed rock, and lingam-yoni designs. There are also various Hindu mythological motifs, including depictions of the gods Shiva, Vishnu, Brahma, Lakshmi, Rama, and Hanuman, as well as animals (cows and frogs). Kbal Spean is described as “a spectacularly carved riverbed, set deep in the jungle to the northeast of Angkor”. The river over which the bridge head exists is also known as Stung Kbal Spean, a tributary of the Siem Reap River that rises in the Kulein mountains north of Banteay Srei. The river bed cuts through sandstone formations, and the many architectural sculptures of Hindu mythology have been carved within the sandstone. The archaeological site occurs in a stretch of the river starting from 150 metres (490 ft) upstream north of the bridge head to the falls downstream. The river, being sanctified by flowing over the religious sculptures, flows downstream, bifurcating into the Siem Reap River and Puok River, which eventually flows into the Tonlé Sap Lake after passing through the plains and the Angkor temple complex 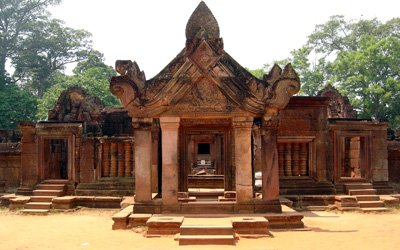 Considered by many to be the jewel in the crown of Angkorian art, Banteay Srei is cut from stone of a pinkish hue and includes

some of the finest stone carving anywhere on earth. Begun in AD 967, it is one of the smallest sites at Angkor, but what it lacks in size it makes up for in stature.The art gallery of Angkor, Banteay Srei, a Hindu temple dedicated to Shiva, is wonderfully well preserved and many of its carvings are three-dimensional. Banteay Srei means ‘Citadel of the Women’ and it is said that it must have been built by a woman, as the elaborate carvings are supposedly too fine for the hand of a man. Banteay Srei is one of the few temples around Angkor to be commissioned not by a king but by a brahman, who may have been a tutor to Jayavarman V. The temple is square

and has entrances at the east and west, with the east approached by a causeway. Of interest are the lavishly decorated libraries and the three central towers, which are decorated with male and female divinities and beautiful filigree relief work. Classic carvings at Banteay Srei include delicate women with lotus flowers in hand and traditional skirts clearly visible, as well as breathtaking re-creations of scenes from the epic Ramayana adorning the library pediments (carved inlays above a lintel). ………CLICK TO READ MORE!

The Cambodian Landmine Museum and ReliefFacility is a museum located in Cambodia, south of the Banteay Srey Temple complex, 25 kilometers north of Siem Reap, and inside the Angkor National Park. Tourists began hearing stories about a young Khmer man, Aki Ra, who cleared landmines with a stick and had a house full of defused ordnance. Ra began charging a dollar to see his collection, using the money to help further his activities. Thus began the Cambodia Landmine Museum. In 2007 the Cambodian government ordered Aki Ra’s museum closed. He was allowed to move it to a new location 40 kilometers from Siem Reap, near Banteay Srey Temple, inside the Angkor National Park. A Canadian NGO, the Cambodia Landmine Museum Relief Fund, founded by documentary film producer Richard Fitoussi, raised the money to buy the land and build the Museum. Most of the funding was provided by Tom Shadyac, a movie director from California. The new museum opened in May 2007 and currently houses a 4 gallery museum as well as being the home to 27 children. The Cambodia Landmine Museum exists for 3 reasons

Siem Reap Angkor Wat is the most popular tourist destination around the country and beside the great temples there are some other natural tourist sites like mountains, river, waterfall and human creative, and all the things which offered to human in order to provide to people a great pleasure when those of traveler has been adventured the place. So, human has been developing a lot things and the among of product is Shooting Range/Shooting Bazooka thus gun fire is one of the Cambodia attractive  tourist spot.

Temples and Firing Tours: Of course we can greet any gun fire customers at anywhere around Siem Reap town for your sightseeing around Siem reap. Morning, Our professional military police and also a driver will go to greet you at your hotel or anywhere else that we have set the meeting point, and escort you guys to visit some of Angkor Wat great temples, and then Shooting Range club, by sun set or before sun set we will take you guy back to your place.

Pai Ri stirs boiling sap hunched over a large metallic pan that sits on a fire. Her little shop, near Siem Reap’s famous Banteay Srei temple, is brimming with customers, both local and foreign, taking a casual look at the many jars and bottles on the shelves and the other souvenirs for sale, which include traditional garments like kromas.

A palm tree farmer and a producer of palm sugar, a beloved local sugar product, Mr Ri has been in the business for over a decade, having established her base of operations in a so-called palm sugar village located half way between Siem Reap city and the ancient, pink sandstone temple of Banteay Srei. She confides that business is good, with tourists often interested in learning about the artisanal process involved in concocting the sweet Cambodia treat.

(BBC) is an interactive butterfly exhibit located 25 km north of Siem Reap, on the road to the Landmine Museum and Bantey Srey temple.

The exhibit consists of a netted tropical garden with thousands of free-flying butterflies, all of which are native species to Cambodia. The enclosure is South East Asia’s largest butterfly exhibit and provides residents and tourists with an interactive and visual environment to learn about butterflies and support local communities.

What is Butterfly Farming?

Butterfly farming is the breeding of pupae for sale to local butterfly exhibits or for export to zoos and live exhibitions overseas. Butterfly farms are situated in close proximity to areas of natural forest and provide an alternative, sustainable income to rural communities.

Butterfly farms have been established in many tropical countries worldwide – including the Philippines, Costa Rica, Uganda, Kenya and Tanzania.