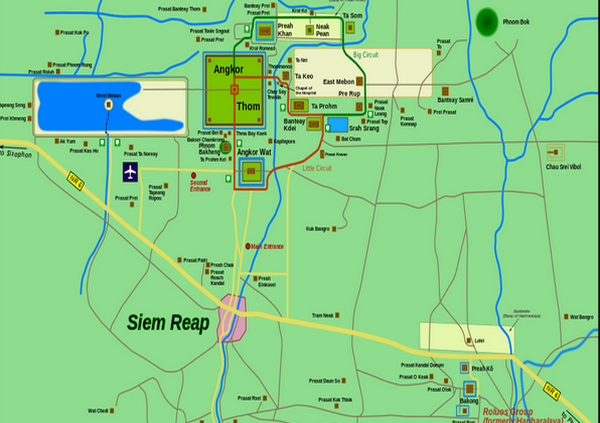 Preah Khan (Khmer: ប្រាសាទព្រះខ័ន; “Royal Sword”) is a temple at Angkor,Cambodia, built in the 12th century for King Jayavarman VII to honor his father. It is located northeast of

Angkor Thom and just west of the Jayatataka baray, with which it was associated. It was the centre of a substantial organisation, with almost 100,000 officials and servants. The temple is flat in design, with a basic plan of successive rectangular galleriesaround a Buddhist sanctuary complicated by Hindu satellite temples and numerous later additions. Like the nearby Ta Prohm, Preah Khan has been left largely unrestored, with numerous trees and other vegetation growing among the ruins….……CLICK TO READ MORE!

Neak Pean (or Neak Poan) (Khmer: ប្រាសាទនាគព័ន្ធ) (“The entwined Some historians believe that Neak Pean represents Anavatapta,:174 a mythical lake in the Himalayas whose waters

are thought to cure all illness. The name is derived from the sculptures of snakes (Nāga) running around the base of the temple structure, neak being the Khmer rendering of the Sanskrit naga. “They are Nanda and Upananda, two nagas traditionally associated with Lake Anavatapta.serpents”) at Angkor, Cambodia is an artificial island with a Buddhist temple on a circular island in Jayatataka Baray, which was associated with Preah Khan temple, built during the reign of King Jayavarman VII. It is the “Mebon” of the Preah Khan baray (the “Jayatataka” of the inscription).Etymology………CLICK TO READ MORE!

Ta Som (Khmer: ប្រាសាទតាសោម) is a small temple at Angkor, Cambodia, built at the end of the 12th century for King Jayavarman VII. It is located north east of Angkor Thom and just

east of Neak Pean. The King dedicated the temple to his father Dharanindravarman II (Paramanishkalapada) who was King of theKhmer Empire from 1150 to 1160. The temple consists of a single shrine located on one level and surrounded by enclosure laterite walls. Like the nearby Preah Khan and Ta Prohm the temple was left largely unrestored, with numerous trees and other vegetation growing among the ruins.  In 1998, theWorld Monuments Fund (WMF) added the temple to their restoration program and began work to stabilise the structure to make it safer for visitors….……CLICK TO READ MORE!

The East Mebon (Khmer: ប្រាសាទមេបុណ្យខាងកើត) is a 10th Century temple at Angkor, Cambodia. Built during the reign of King Rajendravarman, it stands on what was an artificial island at the center of the now dry East  Barayreservoir. The East Mebon

was dedicated to the Hindu god Shiva and honors the parents of the king. Its location reflects Khmer architects’ concern with orientation and cardinal directions. The temple was built on a north–south axis with Rajendravarman’s state temple, Pre Rup, located about 1,200 meters to the south just outside the baray. The East Mebon also lies on an east–west axis with the palace temple Phimeanakas, another creation of Rajendravarman’s reign, located about 6,800 meters due west….……CLICK TO READ MORE!

Pre Rup is located just south of the East Baray, or eastern reservoir, Pre Rup is aligned on a north-south axis with the East Mebon temple, which is located on what was an artificial island

in the baray. The East Mebon was also a creation of the reign of Rajendravarman. Pre Rup’s extensive laterite and brick give it a pleasing reddish tone that is heightened by early morning and late afternoon sunlight. The temple has a square lay-out and two perimeter walls. The outer enclosure is a platform bounded by a laterite wall, 117 meters N-S by 127 meters E-W. A laterite causeway gives entry from the east; unfortunately, a modern road cuts across it. The four external gopuras are cross-shaped, having a central brick section (consisting of three rooms flanked by two independent passageways) and a sandstone vestibule on both sides. To either side inside the eastern gate is a group of three towers aligned north to south. One of the towers appears to have never been built or to have been dismantled later, however they are later additions, probably by Jayavarman V. Further ahead, through another gate, libraries lie to either side of the walkway on the second platform. Just before the entrance there is a stone “cistern”, but scholars believe it was a basement for a Nandi bronze statue rather than being used for cremation ceremonies….……CLICK TO READ MORE!

Considered by many to be the jewel in the crown of Angkorian art, Banteay Srei is cut from stone of a pinkish hue and includes

some of the finest stone carving anywhere on earth. Begun in AD 967, it is one of the smallest sites at Angkor, but what it lacks in size it makes up for in stature.The art gallery of Angkor, Banteay Srei, a Hindu temple dedicated to Shiva, is wonderfully well preserved and many of its carvings are three-dimensional. Banteay Srei means ‘Citadel of the Women’ and it is said that it must have been built by a woman, as the elaborate carvings are supposedly too fine for the hand of a man. Banteay Srei is one of the few

temples around Angkor to be commissioned not by a king but by a brahman, who may have been a tutor to Jayavarman V. The temple is square and has entrances at the east and west, with the east approached by a causeway. Of interest are the lavishly decorated libraries and the three central towers, which are decorated with male and female divinities and beautiful filigree relief work. Classic carvings at Banteay Srei include delicate women with lotus flowers in hand and traditional skirts clearly visible, as well as breathtaking re-creations of scenes from the epic Ramayana adorning the library pediments (carved inlays above a lintel). However, the sum of the parts is no greater than the whole – almost every inch of these interior buildings is covered in decoration. Standing watch over such perfect creations are the mythical

guardians, all of which are copies of originals stored in the National Museum. Banteay Srei was the first major temple restoration undertaken by the EFEO in 1930 using the anastylosis method. The project, as evidenced today, was a major success and soon led to other larger projects such as the restoration of Bayon….……CLICK TO READ MORE!

Banteay Samré (Khmer: ប្រាសាទបន្ទាយសំរែ) is a temple at Angkor, Cambodia, located 400 metres to the east of the East Baray. Built during the reign of Suryavarman II and Yasovarman II in the early 12th century, it is a Hindu temple in the Angkor Wat style.

Named after the Samré, an ancient people of Indochina, the temple uses the same materials as the Banteay Srei.

Banteay Samré was excellently restored by Maurice Glaize from 1936 until 1944. The design of its single ogival tower is immediately recognizable as Angkor Wat style along with other temples in the region such as Thommanon and Chau Say Tevoda. Due to this temple’s similarity to some monuments of north-east Thailand, it has the appearance of a compact Phimai. While there are no inscriptions describing its foundation, it seems likely to have been built by a high official of the court during the reign of King Suryavarman II………CLICK TO READ MORE!