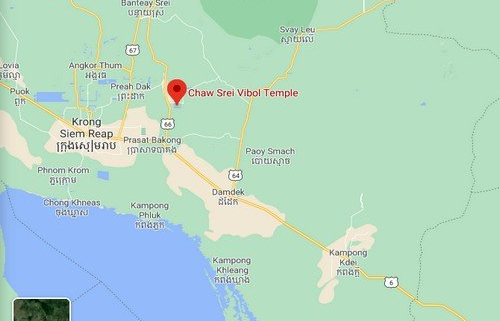 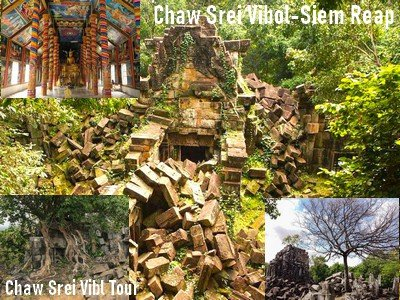 Chau Srei Vibol, also known by its modern name Wat Trak, is a large hilltop temple complex about 17 kilometers due east of Angkor Wat. Due to its distance from the bulk of the monuments in the Angkor archaeological zone, the site is rarely visited by tourists and remains shrouded in mystery. No stelae or epigraphic inscriptions have ever been found to attest to its significance or lineage. Construction of the temple probably dates to the reign of Suryavarman I (r. 1006-1050?), a prolific builder who was responsible for a number of large-scale building projects along the fringes of the empire including Preah Khan Kompong Svay, Preah Vihear, and Phnom Chisor (near present-day Phnom Penh). Closer to home, he also erected the temple-mountain Phimeanakas, Ta Keo, and the enormous western baray reservoir (measuring 2.1 x 8 kilometers). Chau Srei Vibol was built on a similar monumental scale with a moat measuring 1 x 1.5 kilometers, enclosing an artificial ‘island’ measuring roughly 650 x 1050 meters. The temple sat alongside the eastern branch of the great royal road linking central Angkor to the iron-smelting center at Preah Khan Kampong Svay, about 80 kilometers due east. Like pearls on a necklace, a variety of royal rest houses and other important temples—such as Beng Mealea—dotted the roadside at regular intervals. Though Chau Srei Vibol was not the reason for the road’s existence, it clearly benefited from its presence.

In Suryavarman’s time the temple probably stood at the heart of a vast metropolis or one which was planned, as the temple’s inner enclosure occupies less than 1% of the land contained within the moat. Nothing remains of the city’s residential structures, as these were typically made of perishable materials. The only surviving structures, apart from the inner sanctuary and the perimeter walls, are a laterite-lined reservoir to the southwest and a curious cruciform-shaped building to the south. The purpose of the latter structure is not known, though it strongly resembles a similar (though more refined) hall at Beng Mealea.

The temple has never been restored and is now in a precarious state. As early as 1903 Lunet de La Jonquire remarked on the temple’s poor condition, noting signs of deliberate damage (particularly on the east gopura of the 2nd enclosure). Vittorio Roveda notes that “The locals blame foreign invaders, presumably the Siamese” (p. 362). Petrotchenko, on the other hand, suggests that Cham armies may have inflicted harm as they burst upon the empire from the east, passing by (or through) Chao Srei Vibol as they marched on Angkor to the west.

The heart of the temple is its innermost enclosure, measuring about 40 x 50 meters. It stands on the summit of a natural hillock about 30 meters above the surrounding plain, suggesting that the location of the temple was determined foremost by topographic factors. In plan it strongly resembles Chau Say Tevoda or the inner enclosure of Banteay Samre, though the central tower lacks a mandapa (long antechamber). Like other temples built by Suryavarman I, the stonework exhibits a high degree of craftsmanship with particularly refined carvings visible on the rear of the south ‘library’, the best preserved building.