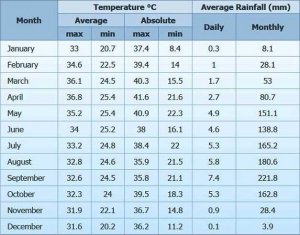 Cambodia: Weather and when to go

Cambodia is blessed with one of Asia’s simpler weather systems and despite having two distinct weather seasons you can travel in Cambodia all-year-round.  In general, the entire country is subject to the same weather patterns, mainly due to the relatively uniform altitude and latitude throughout Cambodia.

There are two distinct seasons – dry (October to late April) and wet (May to late September). Within each season there are variations in temperature, with the final few dry months leading up to the wet season (March and April) and the early months of the wet season (May and June) usually being the hottest of the year with temperatures in excess of 35°C at times.

Humidity is at its height during March and April whilst the coolest months of the year tend to between October and December, however this is cool for Cambodia but far from chilly (avg temperatures 24°C – 26°C).

Road to Siem Reap About Cambodia
Scroll to top