The Bayon (Khmer: ប្រាសាទបាយ័ន, Prasat Bayon) is a well-known and richly decorated Khmer temple at Angkor in Cambdia. Built in the late 12th or early 13th century as the official state temple of the Mahayana Buddist King Jayavaraman VII ( Khmer: ព្រះបាទជ័យវរ្ម័នទី ៧), the Bayon stands at the centre of Jayavarman’s capital, Angkor Thom ( Khmer: អង្គរធំ). Following Jayavarman’s death, it was modified and augmented by later Hindu and Theravada Buddhist kings in accordance with their own religious preferences.

The Bayon’s most distinctive feature is the multitude of serene and smiling stone faces on the many towers which jut out from the upper terrace and cluster around its central peak. The temple is known also for two impressive sets of bas-reliefs, which present an unusual combination of mythological, historical, and mundane scenes. The current main conservatory body, the Japanese Government Team for the Safeguarding of Angkor (the JSA) has described the temple as “the most striking expression of the baroque style” of Khmer architecture, as contrasted with the classical style of [[Angkor Wat (Khmer: ប្រាសាទអង្គរវត្ត)]] .

According to scholars, King Jayavarman VII bears a strong resemblance to the face towers of the Bayon.

The Bayon was the last state temple to be built at Angkor (Khmer: ក្រុងអង្គរ), and the only Angkorian state temple to be built primarily as a Mahayana Buddist shrine dedicated to the Buddha, though a great number of minor and local deities were also encompassed as representatives of the various districts and cities of the realm. It was the centrepiece of Jayavarman VII’s massive program of monumental construction and public works, which was also responsible for the walls and Naga-bridges of Angkor Thom( Khmer: អង្គរធំ) and the temples of Preah Khan ( Khmer: ប្រាសាទព្រះខ័ន), Ta Prom (Khmer: ប្រាសាទតាព្រហ្ម) and Banteay Kdei ( Khmer: ប្រាសាទបន្ទាយក្តី). From the vantage point of the temple’s upper terrace, one is struck by “the serenity of the stone faces” occupying many towers.

The similarity of the 216 gigantic

faces on the temple’s towers to other statues of the king has led many scholars to the conclusion that the faces are representations of Jayavarman VII (Khmer: ព្រះបាទជ័យវរ្ម័នទី ៧)himself. Others have said that the faces belong to the bodhisattva of compassion called Avalokitesvara or Lokesvara. The two hypotheses need not be regarded as mutually exclusive. 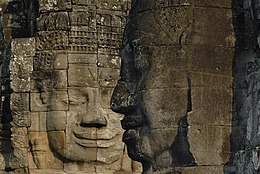 Angkor scholar George Coedes has theorized that Jayavarman stood squarely in the tradition of the Khmer monarchs in thinking of himself as a “devaraja” (god-king), the salient difference being that while his predecessors were Hindus and regarded themselves as consubstantial with Shiva and his symbol the lingam, Jayavarman as a Buddist identified himself with the Buddha and the bodhisatta.

Since the time of Jayavarman VII, the Bayon has undergone numerous additions and alterations at the hands of subsequent monarchs. During the reign of Jayavarman VIII in the mid-13th century, the Khmer empire reverted to Hinduism and its state temple was altered accordingly. In later centuries, Theravada Buddism became the dominant religion, leading to still further changes, before the temple was eventually abandoned to the jungle. Current features which were not part of the original plan include the terrace to the east of the temple, the libraries, the square corners of the inner gallery, and parts of the upper terrace.  In the first part of the 20th century, the Ecole Francaise dÉxtrem Orient took the lead in the conservation of the temple, restoring it in accordance with the technique of anastylosis. Since 1995 the Japanese Government team for the Safeguarding of Angkor (the JSA) has been the main conservatory body, and has held annual symposia.

The original name for the Bayon is Jayagiri (or “Victory Mountain”). After French occupancy, it was later named Banyan Temple due to its religious significance and Buddhist imagery (the Buddha is said to have attained enlightenment under the Bayan tree). When the local Khmer came to work at renovating Banyan Temple, there was a mispronunciation in Banyan, which was pronounced Bayon. The name then stuck. 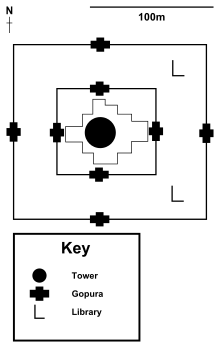 The Bayon in plan, showing the main structure. The dimensions of the upper terrace are only approximate, due to its irregular shape.

The temple is oriented towards the east, and so its buildings are set back to the west inside enclosures elongated along the east-west axis. Because the temple sits at the exact centre of Angkor Thom, roads lead to it directly from the gates at each of the city’s cardinal points. The temple itself has no wall or moats, these being replaced by those of the city itself: the city-temple arrangement, with an area of 9 square kilometres, is much larger than that of Angkor Wat to the south (2 km²). Within the temple itself, there are two galleried enclosures (the third and second enclosures) and an upper terrace (the first enclosure). All of these elements are crowded against each other with little space between. Unlike Angkor Wat, which impresses with the grand scale of its architecture and open spaces, the Bayon “gives the impression of being compressed within a frame which is too tight for it.