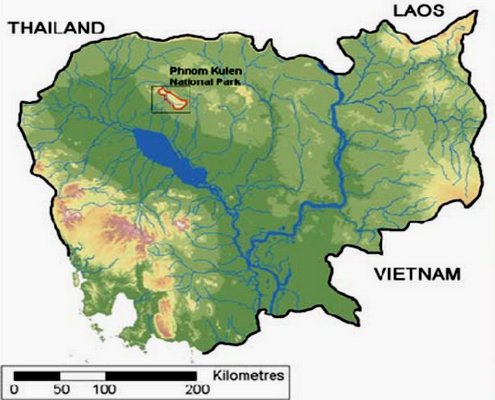 The day tour reverses direction and avoids the tourists crowds. Due to the volume of tourists in Angkor, I recommend this itinerary, enabling you to feel free and peaceful for your photos!

ATTRACTIONS ARE POSSIBLE TO VISIT BY CAR

If we have time, I will add them for your trip such as:

After finishing PHNOM KULEN trip, If we still have time on the way back, we will let you see some attractions on the way such as: BANTEAY SREI TEMPLE / LANDMINE MUSEUM / SHOOTING RANGE / PALM MARKET / BBC BUTTERFLY CENTER –

CHECK ATTRACTIONS AND PRICE ON THE NEXT PAGES

It was originally constructed as a Hindu temple of god Vishnu for the Khmer Empire, gradually transforming into a Buddhist temple towards the end of the 12th century. It was built by the Khmer King Suryavarman II in the early 12th century inYaśodharapura (Khmer: យសោធរបុរៈ, present-day Agkor), the capital of the Khmer Empire, as his state temple and eventual mausoleum. Breaking from the Shaiva tradition of previous kings, Angkor Wat was instead dedicated to Vishnu. As the best-preserved temple at the site, it is the only one to have remained a significant religious centre since its foundation. The temple is at the top of the high classical style of Khmer architecture. It has become a symbol of Cambodia, appearing on its national flag, and it is the country’s prime attraction for visitors. Angkor Wat combines two basic plans of Khmer temple architecture: the temple-mounntain and the later galleried temple.……CLICK TO READ MORE!

Angkor Thom was established as the capital of Jayavarman VII’s empire, and was the centre of his massive building programme. One inscription found in the city refers to Jayavarman as the groom and the city as his bride.

Angkor Thom seems not to be the first Khmer capital on the site, however. Yasodharapura, dating from three centuries earlier, was centred slightly further northwest, and Angkor Thom overlapped parts of it. The most notable earlier temples within the city are the former state temple of Baphoun and Phimeanakas which was incorporated into the Royal Palace. The Khmers did not draw any clear distinctions between Angkor Thom and Yashodharapura: even in the fourteenth century an inscription used the earlier name. The name of Angkor Thom—great city—was in use from the 16th century.  The last temple known to have been constructed in Angkor Thom was Mangalartha, which was dedicated in 1295.………..……CLICK TO READ MORE!

The Bayon(Khmer: ប្រាសាទបាយ័ន, Prasat Bayon) is a well-known and richly decorated Khmer temple at Angkor in Cambdia. Built in the late 12th or early 13th century as the official state temple of the Mahayana Buddist King

Jayavaraman VII ( Khmer: ព្រះបាទជ័យវរ្ម័នទី ៧), the Bayon stands at the centre of Jayavarman’s capital, Angkor Thom ( Khmer: អង្គរធំ). Following Jayavarman’s death, it was modified and augmented by later Hindu and Theravada Buddhist kings in accordance with their own religious preferences.

The Bayon’s most distinctive feature is the multitude of serene and smiling stone faces on the many towers which jut out from the upper terrace and cluster around its central peak. The temple is known also for two impressive sets of bas-reliefs, which present an unusual combination of mythological, historical, and mundane scenes. .……CLICK TO READ MORE!

Ta Prohm (KHMER ប្រាសាទតាព្រហ្ម, pronunciation: prasat taprohm) is the modern name of the temple at Angkor, Siem Reap Province, Cambodia, built in the Bayon style largely in the late 12th and early 13th centuries and

originally called Rajavihara (In Khmer: រាជវិហារ). Located approximately one kilometre east of Angkor Thom and on the southern edge of the East Baray, it was founded by the Khmer King Jayavaraman II as a Mayana Buddhist monastery and university. Unlike most Angkorian temples, Ta Prohm is in much the same condition in which it was found: the photogenic and atmospheric combination of trees growing out of the ruins and the Jungle surroundings have made it one of Angkor’s most popular temples with visitors. UNESCO inscribed Ta Prohm on the World Heritage List in 1992………CLICK TO READ MORE!

The Baphuon (Khmer: ប្រាសាទបាពួន) is a temple at Angkor,Cambodia. It is located in Angkor Thom, northwest of the Bayon. Built in the mid-11th century, it is a three-tiered temple mountount. built as the state temple of Udayadityavaraman II. dedicated to the Hindu God Shiva.

It is the archetype of the Baphuon style. The temple adjoins the southern enclosure of the royal palace and measures 120 metres east-west by 100 metres north-south at its base and stands 34 meters tall without its tower, which would have made it roughly 50 meters tall. Its appearance apparently impressed Temur Khan’s late 13th century envoy Chou Ta-kuan during his visit from 1296 to 1297, who said it was ‘the Tower of Bronze…a truly astonishing spectacle, with more than ten chambers at its base.’ In the late 15th century, the Baphuon was converted to a Buddhist temple. A 9 meter tall by 70 meter long statue of a reclining Buddha was built on the west side’s second level, which probably required the demolition of the 8 meter tower above..……CLICK TO READ MORE!

Cambodia, is a Hindu temple in the Khleang style, built at the end of the 10th century, during the reign of Rajendravarman (from 941-968), then completed by Suryavarman I, in the shape of a three tier pyramid as a Hindu temple. On top of the pyramid there was a tower, while on the edge of top platform there are galleries. Phimeanakas is located inside the walled enclosure of the Royal Palace of Angkor Thom north of Baphuon………CLICK TO READ MORE!

Cambodia. It was built in the Bayon style under Jayavarman VII, though its modern name derives from a 15th-century sculpture discovered at the site. The statue depicts the Hindu god Yama, the god of death. The statue was called the “Leper King” because discolouration and moss growing on it was reminiscent of a person with leprosy, and also because it fit in with a Cambodian legend of an Angkorian king Yasovarman I who had leprosy. The name that the Cambodians know him by, however, is Dharmaraja,………CLICK TO READ MORE!

The Terrace of the Elephants (Khmer: ព្រះលានជល់ដំរី) is part of the walled city of Angkor Thom, a ruined temple complex in Cambodia. The terrace was used byAngkor’s king Jayavarman VII as a platform from which to view his victorious returning army.

It was attached to the palace of Phimeanakas (Khmer: ប្រាសាទភិមានអាកាស), of which only a few ruins remain. Most of the original structure was made of organic material and has long since disappeared. Most of what remains are the foundation platforms of the complex. The terrace is named for the carvings of elephants on its eastern face.The 350m-long Terrace of Elephants was used as a giant reviewing stand for public ceremonies and served as a base for the king’s grand audience hall. It has five outworks extending towards the Central Square-three in the centre and one at each end. The middle section of the retaining wall is decorated with life size garuda and lions; towards either end are the two parts of the famous parade of elephants complete with their Khmer mahouts….……CLICK TO READ MORE!

Ta Keo had to be the state temple of Jayavarman V, son of Rajendravarman, who had built Pre Rup. Like Pre Rup, it has five sanctuary towers arranged in a quincunx, built on the uppermost

level of five-tier pyramid consisting of overlapping terraces (a step pyramid), surrounded by moats, as a symbolic depiction of Mount Meru. Its particularly massive appearance is due to the absence of external decorations, as carving had just begun when the work stopped, besides an elaborate use of perspective effects. It is considered an example of the so-called Khleang style.